The waters of the Bay of Fundy produce an amazing 7 billion cubic feet of tidal action into and out of the areas around the island. This happens every six hours. With this, the largest natural whirlpool in the world is formed between the western edge of Campobello and the eastern edge of Eastport, ME, dubbed “Old Sow.” 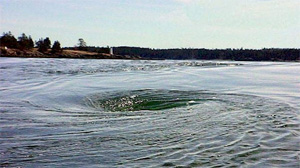 Old Sow is legendary in that it has actually devoured seamen in non-motorized boats throughout the centuries. This Davy Jones’ Locker of sorts is safe provided a one maintains a certain distance. Local inhabitants, fishermen and ferryboat operators know this and respect Old Sow.

Whirling on the Canadian side of the international border in waters called Western Passage between Eastport and Deer Island, the Old Sow whirlpool boasts currents of more than six knots, tides reaching 26 feet and chartered depths of 405 feet.

Coastal information has repeatedly called Old Sow the world’s largest whirlpool, while a few conservative texts call her the largest whirlpool in this hemisphere. From 1817 to 1995, a number of boats and at least 10 people have met their end as a result of Old Sow, which is most dangerous on the flood tide, especially for small boats.

According to Barteau, the Saint Croix Courier of March 30, 1871 had a report that read; “Drowned – a man named Norwood was drowned from a boat off Deer Island Point on Friday last [March 24, 1871]. Deceased belonged to Eastport.

Grace B. Carter also referred to this death in an article for Yankee magazine; “There was the wreck of a two-masted schooner the Quickstep owned and operated by two Norwood brothers, Robert and Abner. They accidentally got into currents near the pools one day just as a squall struck. They couldn’t handle her. She went straight into Old Sow and disappeared with both men. Not a stick of her timbers was ever found or anything seen of Abner again. Robert was picked up some time later by a coaster, both arms locked around an oar, his head in the water, but alive”.

The wind sailing era changed with the advent of the gasoline engine, and with it the number of Old Sow deaths dropped. While there are present-day reports of large ships being turned askew by the turbulent waters, drownings and sinkings have been rare since the turn of the century. There have, however, been two.

Cecil Chaffee drowned at age 44 (possibly in 1912) while rowing near Old Sow. James Roland Mitchell Sr. was drowned in 1943 when he stood up to fix the rudder of his sailboat and the boom swung around and knocked him out of the boat. It is not clear whether wind or tide or both were responsible for this accident. Both men were from Eastport.

Another manpower feat was the Quoddy Tidal Project, which Kinney maintains reduced old Sow’s strength. The project, begun during the 1930′s, created two dams (from Eastport to Carlow Island and from Carlow Island to the mainland at Perry), which formed a causeway and became state highway Route 190. Kinney maintains the causeway interrupted the waters, which previously swirled in an unrestricted manner around the circumferences of Moose and Dog islands.

On May 2nd, 1995, a 55-foot Deer Island fishing boat, the Fundy Star II sank off Indian Island near Deer Island Point and Old Sow. According to a Quoddy Tides article, the vessel, coming around Deer Island Point and loaded with tanks of salmon smolts, “hit the flood tide … and suddenly keeled over and onto it’s side.” The three men aboard escaped injury by managing “to pilot the boat a few hundred feet north” into less dangerous waters, where they were rescued by a nearby fishing boat.