This is also an area rich in lighthouses. Within the Quoddy Loop alone, there are four (4) and then another dozen within nearby.

East Quoddy Lighthouse (a.k.a. Head Harbour Lightstation to the locals) is situated at the northernmost tip of Campobello Island. It is the oldest lighthouse in New Brunswick and is privately funded through donations. 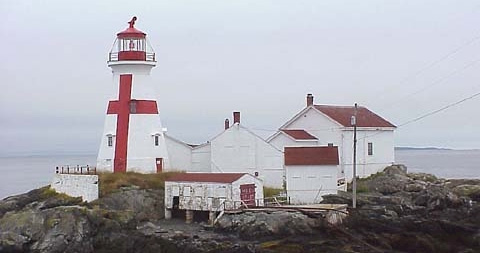 One interesting feature of the lighthouse is that it is inaccessible to pedestrian traffic most of the time. To get to the lighthouse, one must walk along a path that is only present at low tide. Since low tide occurs only four times each day and at least one of the four events is in total darkness, it makes getting to the lighthouse something that could be commercialized with only a little effort. 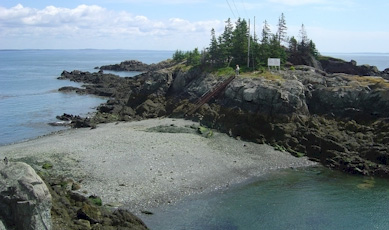 At any time of the day, a dozen or more vehicles will be parked at the observation site.

Mulholland Point Lighthouse is situated at the southwestern tip of Campobello Island and is no longer inactive service. 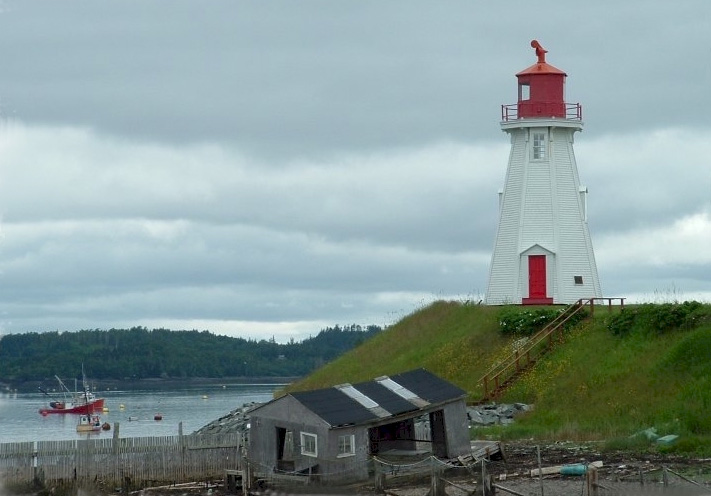 Mulholland Point Lighthouse was built in 1885 and served as a guide for the many small coasters, passenger ships, and freighters traversing the narrow Lubec Channel en route to or from the United States or Canadian ports on Grand Manan Island, just south of Campobello Island.

Although Mulholland Lighthouse is not open to the public, visitors are free to walk around the structure and to enjoy the picnic site next to it. From the picnic area at Mulholland Point are views of the FDR Memorial Bridge, Lubec, Maine and the Lubec Channel Lighthouse.

Sparkplug Lighthouse is situated in the Lubec Channel just southeast of the FDR International Bridge. In the picture below, the bridge can be spotted just to the right of the base of this massive structure. 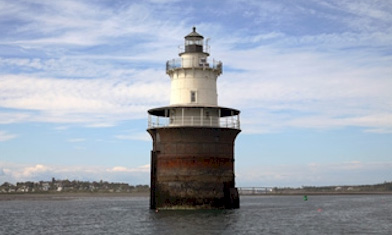 It was one of 17 Maine Sparkplugs commissioned by the United States and is fully operational. There are only three of these famous “sparkplugs” left today in Maine.

Lubec Channel Light was built at the harbor’s western entrance for $20,000 in 1889 with a life expectance of 100 years. In 1989 when the light was to be decommissioned, the local residents mounted a “Save the Sparkplug” campaign. Automobile sparkplugs were handed out to gain attention for the cause.

In 1992, a $700,000 renovation restored old Sparky to its best condition in decades. The renovation included the stabilization of the foundation, which had developed a slight tilt over the years. New plates were installed on the caisson and approximately 200 cubic yards of concrete was pumped into its’ base. Twelve (12) piles were then driven through the caisson into the bedrock. One of the piles was driven 149 feet.

In the summer of 2001, the lighthouse received a new coat of paint and other maintenance from the U.S. Coast Guard. 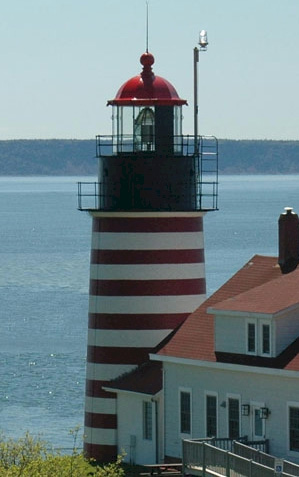 Perhaps the most famous and most photographed lighthouse in the world is West Quoddy Lighthouse, literally at the easternmost tip of the United States in Lubec.

This most famous piece of architecture operates 24/7 and is staffed by an all-volunteer crew for tours and a paid light keeper who lives in the upstairs of the house along with his family. In an attempt to extend the life of this lighthouse, access to the actual tower and stairway is limited to only one day each year – usually around the week that envelops Independence Day.